Achievements of hot pepper and it agro-ecological requirements in Ethiopia: A review paper

Hot pepper (Capsicum species) belongs to the family of Solanaceae and originated in the new world tropics and subtropics (Mexico, Central America and Andes of South America) over 2000 years ago (Dessie and Birhanu, 2017). The Capsicum genus consists of approximately 22 wild species and five domesticated species, which include C. baccatum, C. annum L., C. frutescens L., C. chinenses and C. pubescens L. The C. annuum complex, which contains three closely related species, C. annuum, C. frutescens and C. chinenses are the most widely grown in the Americas and worldwide. C. frutescens and C. chinenses are cultivated in Africa and Asia as spice crop, as intact fruits or for their oleoresin content. The other two species namely C. baccatum and C. pubescens are predominantly confined to Latin. C. annuum has been domesticated in the highlands of Mexico, and includes most of the Mexican chili peppers, most of the hot peppers in Africa and Asia and the various cultivars of sweet peppers grown in temperate countries America (Dessie and Birhanu, 2017).

Next to tomato hot pepper (Capsicum annuum L.) is the world’s most important vegetable crop and uses as fresh, dried, vegetable, spices, and condiments. Hot pepper is a warm season, high- value crop important in the local dishes, Karia, berbere, and processing industries as a coloring agent and raw material for the export market in the form of oleoresin (Dessie and Birhanu, 2017).

It was introduced to Ethiopia by the Portuguese in the 17thcentury (Yemane, 2017). Both sweet and hot peppers are processed into many types of sauces, pickles, relishes and canned products. The proliferation of ethnic restaurants and food products from such as Mexico, India and Thailand has positively influenced the demand for peppers throughout the world.

In Ethiopia, the crop is cultivated at diverse ecological zones from sea level to 2000 m.a.s.l under rain fed and irrigated conditions. Whereas chili and sweet pepper are grown in lower altitudes relatively in warmer areas than for hot pepper and is mainly grown in state farms for export. Birds’eye chili, which is the most pungent of all the peppers, is not in great demand, though few plants are commonly found around the homesteads in high rain fall warmer areas of the country (Wubalem, 2019). In our country a, the total area under hot pepper production for green pod has enhanced from 54,376 hectares with the total production of about 770,349 quintalsto 81,544 hectares through 2003/04-2005/06 years.

Cultivation and importance of hot pepper

Capsicum fruits are used in the form of fresh, dried or processed, as table vegetables and as spices or as condiments, it increases the acceptance of the insipid basic nutrient foods. The nutritional value of hot pepper merits special attention, as it is a rich source of vitamin A, C and E. Both hot and sweet peppers contain more vitamin C than any other vegetable crops. Oleoresins of paprika and Capsicum are the two important extracts of pepper (Yemane, 2017).

Red pepper it is an annual crop which grows at an altitude from 1400 up to 2100 m.a.s.l. Growing pepper requires soil that is well drained and rich in organic matter, as well as 600 upto 650 mm rain fall. It grows well on well-prepared soil that is free from perennial weed. It is propagated by raising seedlings in a nursery. Depending on the area, harvesting starts five to six months from transplanting. Planting is carried out in the beginning of the main rain season (Wubalem, 2019).

Soil fertility decline and a resultant nutrient deficiency is the most yield limiting factor for vegetable production in different agro-ecologies of Ethiopia, of them the major limiting ones are N, P and other macro and micronutrients such as K, S, B and Zn deficiencies. Those deficiencies occur on high lands of Ethiopia because of high rain and frost attack is one of limiting in high land and too humid areas.

Hot peppers like most other plants, needs well drained, moisture holding loam soil (sandy loam) containing some organic matter. A pH of 6.5-7.5 is suitable and the land should be level to 0.01- 0.03% slope to allow adequate drainage and prevent root diseases. Adequate water supply is essential. Water stress can lead to abscission of fruit and flowers, especially when it occurs during flowering and reduces yield through reduced pollination. The extreme case can result in increased risk of diseases. Poorer soil types and water stress are believed to produce poor quality and unmarketable pod (Nimona et al., 2018).

The attitude of growing area affect the capsaicinoid content of hot pepper, weather conditions, growing conditions, and fruit age also have effect on capsaicinoid content of hot pepper. Plant breeders can selectively develop cultivars with varying degrees of pungency. Also, growers can somewhat control pungency by the amount of stress to which they subject their plants. More specifically, any stress to the hot pepper plant will increase the amount of capsaicinoid level in the pods. Pungency is increased with increased environmental stress. A few hot days can increase the capsaicinoid content significantly. In New Mexico, it has been observed that even after furrow irrigation, the heat level will increase in the pods. The plant senses the flooding of its root zone as a stress, and increases the capsaicinoid level in its pods. If the same cultivar was grown in both a hot semi-arid region and a cool coastal region, the fruit harvested from the hot semi-arid region would be contain higher capsaicinoid than that of the fruits harvested in the cool coastal climate (Yemane, 2017).

The water shortage during the period between flowering and fruit development decrease final fruit production some reports that continuous water stress significantly reduced total fresh weight of fruit, and the highest marketable yield was found at irrigation of 120% and the lowest at 40% evapotranspiration (ET). This indicates that total pepper yield was less at lower levels of irrigation (Wubalem, 2019). Throughout the world, since the available water for agriculture is generally limited, the knowledge of the relationship between yield and quality of the product and irrigation regimes is an important factor to maximize the benefit of the available water supply.

Effective irrigation is essential to obtain the best yields of the fruit of the right size. The soil must be kept moist to a minimum depth of 45 cm. During the first 2 weeks after transplanting, the plants should be irrigated twice or three times per week for the transplants to become established, thereafter, once or twice per week depending on climatic conditions and soil type is advisable (Wubalem, 2019).

Research achievements of hot pepper in different parts of Ethiopia

As experiment that was conducted at Gatto Kebele Farmer training Center (FTC) which is found in Segen People's Zone of Derashea Woreda, South- Eastern Ethiopia. The area has an altitude of 1142 m.a.s.l. The maximum and minimum mean annual temperatures are 27°C and 21°C respectively. Sandy loam with pH of 5.4 is the character of the soil where the experiment was conducted. The area receives 1200 mm average rainfall annually. The researchers gain the following finding (Table 1).

As shown above the research conducted well in this type of agro climatic condition and It is advisable that producers around the study area should have to use Backo local variety for better performance and Backo provides high yield in both cropping year with average fresh and dried fruit yield of 107.07 Q/ha and 16.775 Q/ha. (Abraham et al., 2016).

The maximum and minimum rainfall is 1200 mm and 900 mm recorded at Boke district. Daro and labu district has the mean annual minimum and maximum temperature of 14 and 26°C were recorded and an average of 16°C while meaning annual minimum and maximum temperature 13.56°C and 25°C, at Boke district, respectively In two districts of study areas, the rainfall is erratic; onset is unpredictable, its distribution and amount are also quite irregular. Consequently most ‘‘kebele’’ frequently face a shortage of rain; hence moisture stress is one of the major production constraints in the district. The pattern of rainfall is bimodal and its distribution is mostly uneven in two districts. Generally, there are two rainy seasons: the short rainy season ‘‘Belg’’ lasts from mid-February to April whereas the long rainy season ‘‘kremt’’ is from June to September.

Water and requirement of hot pepper can be varied from location to location depending on different factors such as soil and other agro-ecologies. For sustainable production of hot pepper for a particular area, specific fertilizer recommendation is very crucial in suitable aero ecologies. Highest marketable yield was obtained in the above agro ecologies (2.05 t/ha)/20.5 Q/ha (Gezahegn et al., 2020).

The other field experiment was conducted at Woramit horticultural research and training sub- center. It is located at 563 km far from Addis Ababa in the Northwestern part of Ethiopia at Bahir Dar. The altitude of the study area is 1800 m.a.s.l with annual rainfall of about 800 to 1250 mm. Monthly mean minimum and maximum temperature is 6.2°C in January and 29.5°C in April, respectively. The soil at this experimental site is Nitosol with moderately acidic (pH 6.4). The other study was conducted at Assosa Agricultural Research Center (ASARC) farm during 2017/18 cropping season, which is located in Assosa District of Benishangul-Gumuz Regional State, western Ethiopia.

It is situated at an altitude of 1553 m a.s.l. The study area is characterized by hot to warm moist lowland plain with uni modal rainfall pattern. The rainy season starts in middle March and lasts to the end of October with maximum rainfall received in the months of June to September. The total annual average rainfall is 1316 mm. The soil type of the study area was characterized as Nitisoil. The results showed that the highest marketable pod yield (2.22 t ha-1) was obtained. With the above agro ecology researchers gain such amount of result (Nimona et al., 2018) (Figure 1). 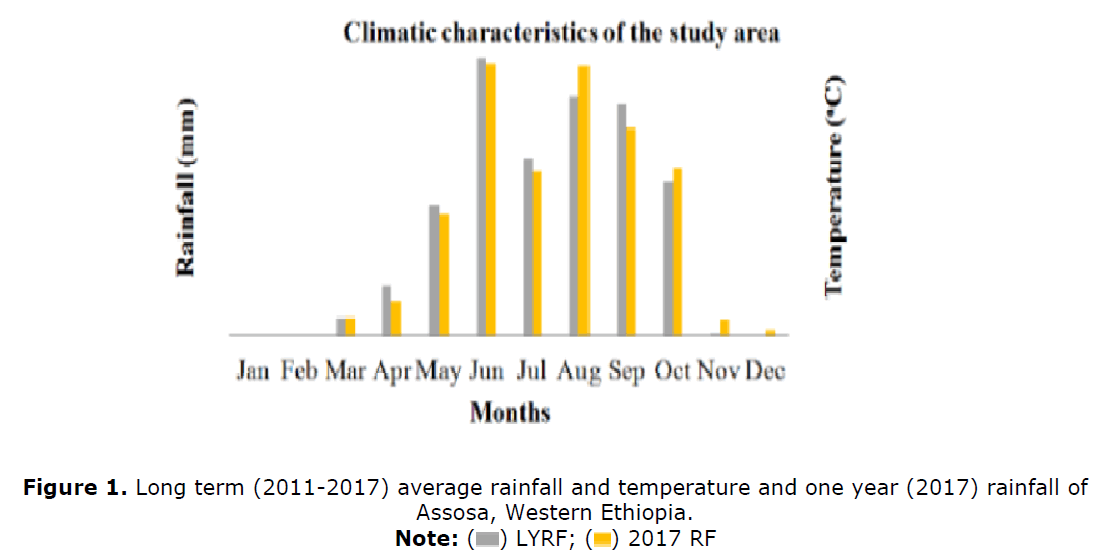 The experimental site is located at 14°06'N latitudes and 38°31'E longitudes with an altitude of 604 meter above sea level. It has chromic vertisol black color. Agro-ecologically it is described as hot to warm semiarid plain sub agro- ecology (SA1-1). The mean maximum temperature varies from 42°C in April to 33°C in August, while the mean minimum temperature is from 22.2°C in May to 17.5°C in July (Shushay C and Haile Z, 2019) (Table 2).

Note: SEM: Standard Error of the Mean; CV:Coefficient of Variation; ns=non-significant; *=significant; **=high significant; g=grams; mm=millimeter, t ha-1=ton per hectare
Means in the same columns corrected by the same letter are not significantly different at p ≤ 0.05

As the above experiment shows agro ecologically similar to this sit are better to the farmers to produce Jelu and Markofana type of verities.

The experimental site is situated in the eastern part of Benna-Tsemay Woreda at Enchete kebele a distance of 82 km away from Jinka town, capital of South Omo Zone, Southern Ethiopia. Geographically, the experimental site is located at 5˚18’0’’ to 5˚31’33’’ N latitude and 36˚52’30’’ to 37˚5’0’’ E longitude, and at an altitude of 550 m above sea level. Agro-ecology of study area was arid and semi-arid with mean monthly maximum and minimum temperature of 38°c and 18°c, respectively and average rainfall pattern of 200- 578 mm (Table 3).

In general, deficit irrigation could be a feasible irrigation technique for hot pepper production where the benefit from saving large amounts of water. Thus, the result indicates that the appropriate and economically viable way of applying 100% ETc in areas were no water stress required to increased production and productivity of hot pepper. As an option applying 85% ETc of irrigation in water stress areas was optimum means to increase production and productivity of hot pepper without affecting yield (Medihin and Tadesse, 2021).

Generally it is good for producer to grow hot pepper in such agro climatic range to gain high yield hot pepper per hectare. The reviewed research outputs reveal that there is potential for increasing hot pepper productivity through improved and available soil fertility management practices. Application of these options in their respective agro ecologies and soil types can contribute considerably to filling the yield gap of hot pepper.